The Ugly American
Wednesday, May 24, 2006
Something Important to think about next Monday. I didn't have all the pictures I wanted to put in this article yesterday, so, I'm adding some more today. I took these last year on a trip to DC with my daughter. 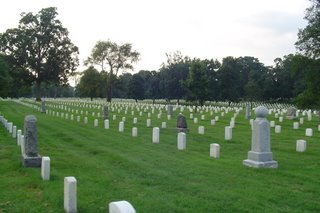 This first picture is of Arlington National Cemetary. A very beautiful and a very sad place. As far as you can see nothing but small white head stones. 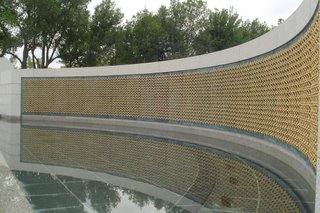 This is a picture of part of the World War II Memorial. In this picture you see 4000 small sculpted bronze stars. They represent over 400,000 men and women that lost their lives defending freedom for the world. 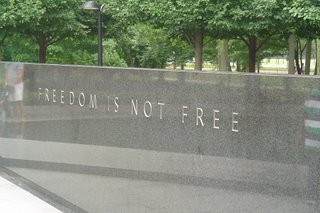 This is a picture from the Korean War Memorial. It seems that a lot of people forget the saying engraved on this wall...they either forget or they just don't care...I hope it's the former, because the latter would really piss me off. 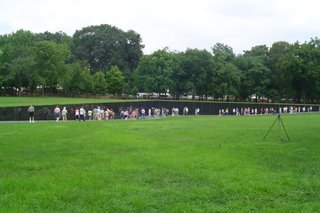 This is a picture from the Vietnam War Memorial. This is the memorial that affected me the most. Maybe it was because of my age. I missed this war by a couple of years, but I had friends that weren't so lucky.

As my daughter and I walked deeper into this memorial, a really strong feeling came over me...it hurt I tell you. My daughter could feel it too...as she heard her daddy doing his best to keep his small sobs to himself, she reached over to me, grabbed my hand and squeezed it tight. It made everything right with the world right at that moment, but I still couldn't help but think about all the other little girls whose dad's names were on this wall and the hand they never got to hold.

So again I ask...Got a minute on Monday? 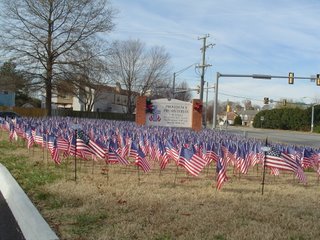 I'm kind of embarrassed that I didn't know this so I'm trying to save all of you...what, 5 people that visit here...the same embarrassment.

Everybody knows that this coming Monday is Memorial Day. Kids are out of school, I don't have to go to work that day...life is pretty much all around good for us. It's a nice three day weekend for a lot of us and that's a good thing. I'm heading up to Jersey to visit family and attend my newest nephew/godsons' first birthday party. But I hope you all...that's you all, not ya'll...I'm still from Jersey and I don't speak like a Virginian...yet...remember what Memorial Day is really all about.

Memorial Day started as Decoration Day right after the Civil War. It was a day set aside to clean up and decorate with flowers our war deads grave sites. The first large observance of Decoration Day was held in 1868 at Arlington National Cemetary. The official birthplace of Decoration/Memorial Day is Waterloo, NY, although, there seems to be some dispute about where it may have really started. The government recognizes Waterloo as the birthplace. That's fine with me.

Over a million American men and women have died in service to our country and really, when you think about it, the world. 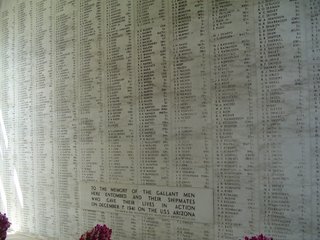 Wednesday, May 17, 2006
My response from BestBuy This is the e-mail I sent to BestBuy. I got my response this morning. It was a good one.

I just wanted to say how nice it was to open my mailbox today May 15, 2006
and find a card from you offering me triple reward points for LAST
WEEKEND.

Maybe you have a few left over cards from last year you'd like to send
me?

Sorry, but I had to...you folks have a nice day.

That's what I sent them and this is their reply...

I am Heather with Best Buy Customer Care.

Thank you for your email and for the smile it gave me. I truly enjoyed
your sense of humor.

I do apologize for the late receipt of your coupon, however it was not
issued from the Rewards Zone Department. We have awarded 15,000 points
to your account for your inconvenience.

I am sorry that we did not meet your expectations. Best Buy strives to
make each experience you have with us positive and as fun as possible,
and we are disappointed if we don?t live up to that expectation. Best
Buy relies on feedback, both positive and negative, to help us find
areas for improvement.

I apologize for any inconvenience this may have caused you. 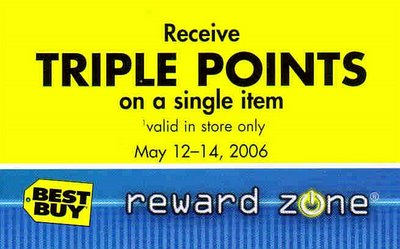 Do you see anything wrong with it? Wanna hint? Today is May 15, 2006. I'm not sure if I would have used it. I am a Reward Zone member and I've received plenty of $5 and $10 certificates from BestBuy from the program. It's my personal opinion that they don't need all this crap if they just took $5 or $10 off the price life would be so much better.

A quick conversation... My oldest daughter called yesterday morning and the conversation went like this...

What do you want?

I want to know who's awake over there...

Why do you care?

Then why'd you call?

To find out who's awake over there.

But, why do you care?

Then, why'd you call?

And you know what? She didn't even smack me when she saw me later on in the day!

I really do like messing with my kids...especially early in the day before they're awake enough to realise I'm messing with them!  ¶ 8:02 AM 0 comments

I bought these new clubs last week. I picked them up on Friday right before my trip up to Jersey to see my family. I hit them at a driving range up there...off a mat...doesn't count...and then I hit them yesterday at a grass range, but still a range. The thing was, I REALLY liked the way they felt at the range...and I was DYING to play a round!

It was just too nice today not to test them out. Nike knockoffs...less than half the price of the real thing but DAMN...they're so...so...nice. Shot the second best round of my life, the first time I took them on the course. Did I say I REALLY like these clubs? Oh yeah...this hybrid club...a three hybrid I guess you call it...another knock-off...just as good as the real thing. I smacked the shit outta da ball today I tell ya!!!

Thanks Tommy! Tommy's the guy that made the clubs...Tommy owns the Golf Ball Shop in Virginia Beach. They sell refirbished golf balls at The Golf Ball Shop. I buy those too! I'm a cheap F#@!\er!!!

Friday, May 05, 2006
Sorry about that... I just noticed that my dyslexic fingers were in control when I typed up the last post. That seems to happen a lot to me. My fingers move faster than my brain...damn...just like my mouth!

You would think in the day and age of spell check that I'd be smarter than that...yeah right!  ¶ 8:00 AM 0 comments

This is part of the conversation between Roy and his "therapist" Molly...Rene Russo...what a hottie!

Well, I tend to think of the golf swing as a poem.

Roy 'Tin Cup' McAvoy: "The critical opening phrase of this poem will always be the grip. Which the hands unite to form a single unit by the simple overlap of the little finger. Lowly and slowly the clubhead is led back. Pulled into position not by the hands, but by the body which turns away from the target shifting weight to the right side without shifting balance. Tempo is everything; perfection unobtainable as the body coils down at the top of the swing. Theres a slight hesitation. A little nod to the gods."
Dr. Molly Griswold: "A, a nod to the gods?"
Roy 'Tin Cup' McAvoy: "Yeah, to the gods. That he is fallible. That perfection is unobtainable. And now the weight begins shifting back to the left pulled by the powers inside the earth. It's alive, this swing! A living sculpture and down through contact, always down, striking the ball crisply, with character. A tuning fork goes off in your heart and your balls. Such a pure feeling is the well-struck golf shot. Now the follow through to finish. Always on line. The reverse C of the Golden Bear! The steel workers' power and brawn of Carl Sandburg's. Arnold Palmer!"

The other line that I think is really awesome from this movie is another Roy McAvoy line... "I hit it again because that shot was a defining moment, and when a defining moment comes along, you define the moment... or the moment defines you."

Wednesday, May 03, 2006
I voted yesterday... It was a small election. A few city council seats and a few school board seats and a vote for a city housing panel. The housing panel vote was easy. It was basically a vote against eminent domain as far as I was concerned and I was pissed at the supremes for what they did in Connecticut!

The city council vote was pretty easy too. I looked at who was an incumbent and who was running against him or her and that's who I voted for to fill the seats. We got rid of two of the old guard, only one managed to keep his job this time around. That's not bad though, two out of three. The big issues here in Virginia Beach are the new assesments on homes and the taxes that go with it and the city's encroachment on NAS Oceana. Our city council has been dropping the ball on these issues for a while now. If the incumbents wanted to get re-elected they should have dealt with the tax issue a long time ago.

City council was a little more difficult, but I looked at a few different things. The biggest thing that got my attention was a list of questions that the local paper had asked all the candidates. One of the questions dealt with the disparity in education with respect to minorities. The people I picked in this election were the ones that said the biggest thing that needs to be done to rectify this disparity issue is get parents involved in their children’s education. That's how I feel about it, so that's who I voted for.

We had a big turn out for the vote yesterday. The last thing I heard on the news last night was we had about 15% of the voters turn out to vote. That's pathetic!  ¶ 12:43 PM 0 comments

Monday, May 01, 2006
Don't bother me...I'm watching the game! Tonight, restarts the rivalry that's been going on for about 90 years now. My Yankees head up to Beantown to play their archrivals, the Boston Redsox. I will be parked in front of my TV. Don't bother me!

The Yankees are starting a pitcher I'm not real familiar with and the Redsox are starting Tim Wakefield. Wakefield throws a knuckle ball. It's a real slow pitch, but for some reason it can be extremely hard to hit at times. The Yankees have had success with Wakefield pitching before, so, maybe, the Yanks will stay in first place. Looking at the stats of the two pitchers it looks like they've both sucked pretty equally. Wang, for the Yankees is 1-1. Wakefiled is 1-4. Bothe ERA's are pretty high. We'll see...

This is the time for them to pull away and never look back.

All you Yankee haters can kiss my lily white...you know the rest!  ¶ 4:39 PM 2 comments